Nearly every business we own is based in the United States. But that doesn’t mean these companies don’t benefit from the growing global middle class. To the contrary, many of the larger US companies are “multinationals” that do a majority of their sales outside the country.

For several years now we’ve felt that this is the right balance. Accounting and legal standards are better here than most elsewhere—we can trust the numbers. And whether it’s language barriers, an insufficient understanding of cultural differences, or just being so far removed geographically, it’s difficult to have good information about a foreign company.

Recently the Chinese government has cracked down on several Chinese public companies, many of them large and technology oriented. That’s made a lot of headlines and has led to falling stock prices for some well known names. But the underperformance of Chinese companies has been going on for about a decade now. 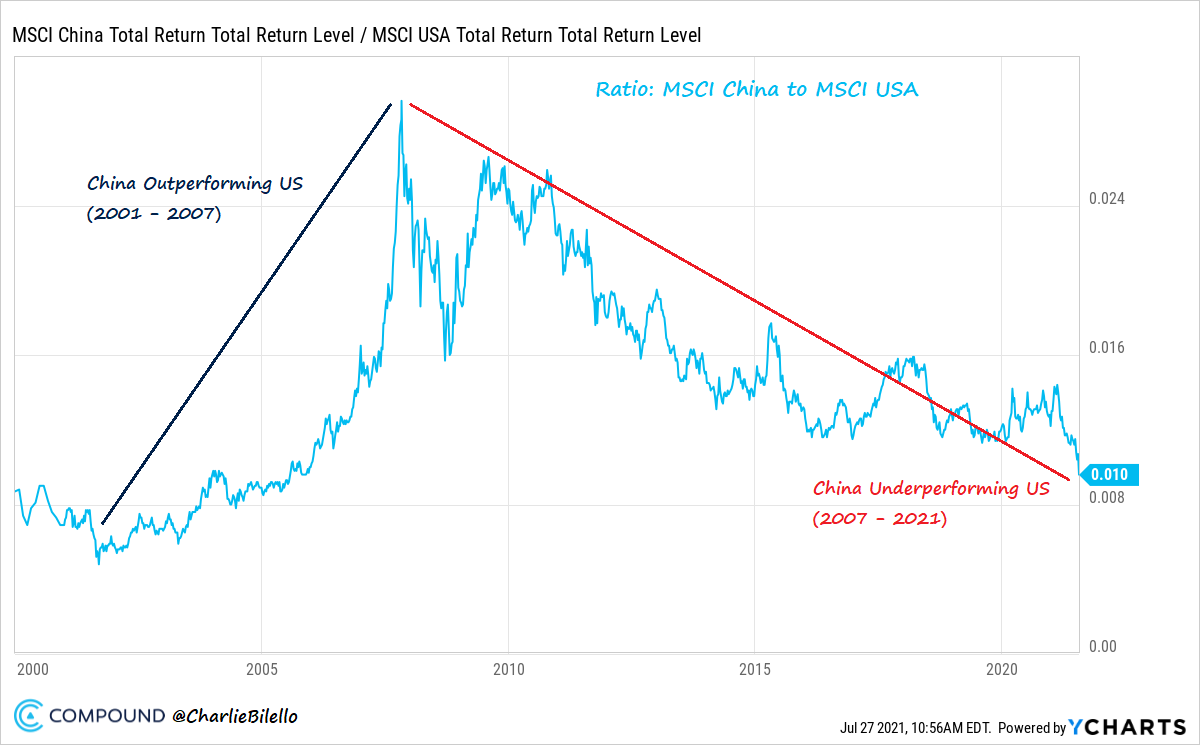 Another reason why we’ve avoided some of this turmoil has to do with how we choose the companies we own.

It’s common for investors to identify a big trend, and then find a company that’s supposed to benefit from the trend. Around the office we refer to that as “top down” investing, as the investor starts with a big picture premise, and places a secondary focus on the individual investments.

We prefer to move in the other direction, with a “bottom-up” selection process. First we find companies that are doing exceedingly well. Next, we try to figure out why the company is doing well, and whether that’s sustainable. Often that leads us to find that the company is benefitting from some large trend, or several large trends.

By focusing first on finding good companies, we’ve been able to avoid headaches. Whereas starting from the premise that “the Chinese economy will continue to grow in size” was a correct one, it didn’t necessarily lead to good investment decisions.

You have Successfully Subscribed!

It is published solely for informational purposes and is not to be construed as a solicitation nor does it constitute advice, investment or otherwise.

To the extent that a reader has questions regarding the applicability of any specific issue discussed above to their individual situation, they are encouraged to consult with the professional advisor of their choosing.

A copy of our Form ADV Part II regarding our advisory services and fees is available upon request.

Our comments are an expression of opinion. While we believe our statements to be true, they always depend on the reliability of our own credible sources. Past performance is no guarantee of future returns.